This post is part of a series about practical network layer 2 exploitation.

Now is the time to change your network administrator hat for the attacker one. Your own, known network now becomes an unfamiliar target.

Before rushing and banging against the nearest devices, it may wiser to just stand back and listen.

On switched networks, users are somewhat isolated from each other thanks to the separation of collision domains. All that remain is some kind white noise… but this white noise in itself can bring invaluable information to an attacker!

In particular we will see how, simply by passively listening to this white noise, an attacker will be able to detect several weaknesses affecting the network and plan his next steps.

In this lab no interaction will occur with either the Admins or the Servers VLANs, the User_1 workstation will be required only for the DHCP Discover messages part: 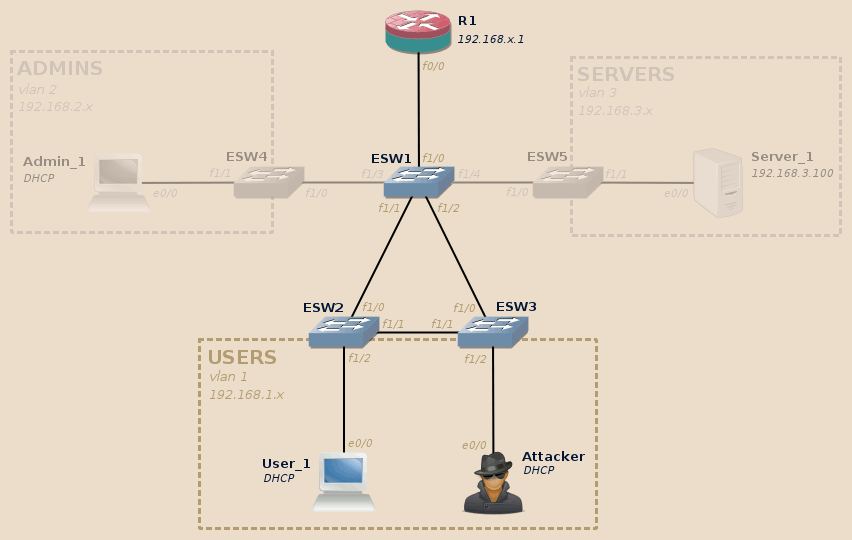 Now is the time to open a session on the Attacker host and fire-up Wireshark. As with most tool we will use in this post series, it requires a raw access to the network devices and must therefore be run as root: this is not a problem on some distributions like Kali where the whole desktop session is running as root, on other you may need to start Wireshark through sudo wireshark.

Once Wireshark is up and listening on your main network interface in promiscuous mode, you should already start to see mostly light-grey packets regularly accumulating as the “white noise” mentioned earlier.

Most of these messages are STP messages, sent every few seconds by the nearby switch: 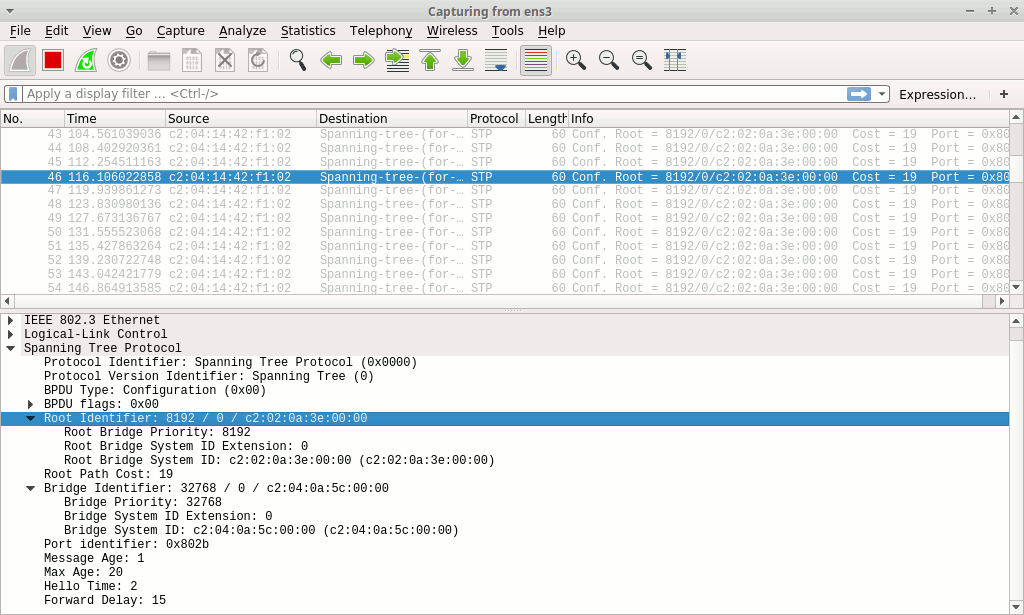 These messages are sent in case we add another switch on our end (in sane networks they should not be sent on access ports). They are used to detect topology loops and build the most efficient forwarding path between connected switches.

The presence of these messages means that we can start discussing with the switch using the STP protocol, potentially inducing changes to the whole spanning tree.

By themselves, this ability won’t allow us to do any really profitable attack against the network. However, in some cases it can provide us a valuable support to make other attacks more effective:

Start or restart the User_1 host. You should eventually see, among other things, a DHCP Discover message popping up in your Wireshark: 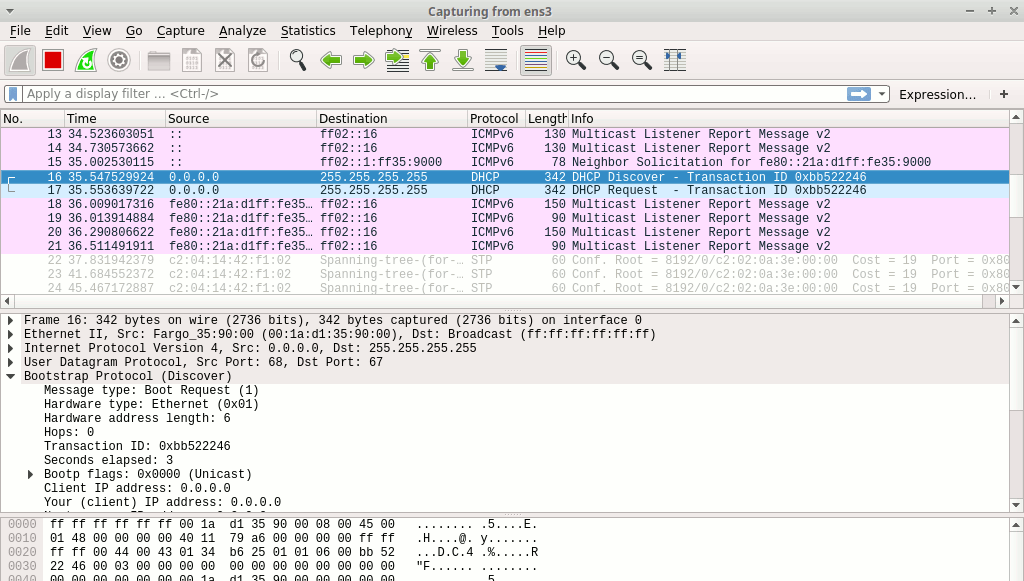 This is a good thing (from an attacker perspective) as this means that DHCP snooping has not been enabled in the switches you are facing. This give the attacker the ability to build a rogue DHCP server, distributing malicious DHCP replies and opening the way to various MITM attacks.

You can also take this occasion to note-down the MAC address of the User_1 machine which appears as the message’s source (Ethernet II, Src field) address.

About every minute, you may encounter a DTP message: 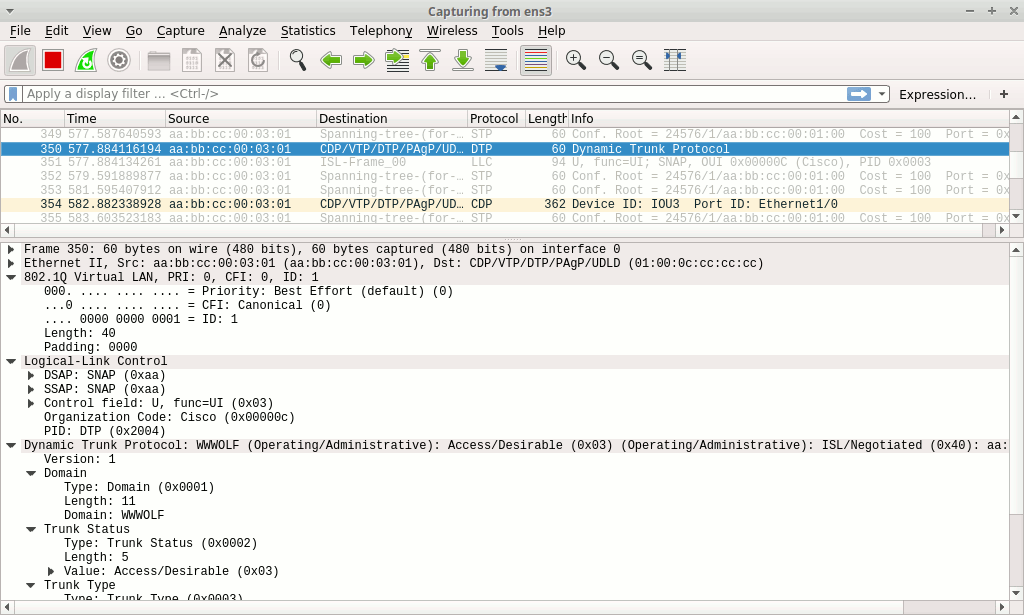 This is your lucky day.

At the low-end, from a purely passive perspective we can see that DTP packets disclose a lot of information regarding the switch configuration, including the VTP domain name, the native VLAN number and the switch port status.

But above all, this opens the most devastating attack we will see in this series as actively engaging in the DTP communication opens the way to VLAN hopping.

The DTP packets, as the CDP ones we will see below, leak the native VLAN information which happens to be the same as the Users VLAN in our lab where the attacker is located.

This is usually documented as a security weakness also allowing VLAN hopping through double-tagging, however Cisco switches do not seem vulnerable to this attack as they correctly drop 802.1Q packets coming on non-trunk ports.

Moreover, even on vulnerable devices the range of this paticualr attack is somewhat limited as it allows only one-way communication (still useful for things like malicious UDP notifications though). As we will see, DTP-based VLAN hopping doesn’t have this limitation.

At last, about every minute you may also encounter a CDP message: 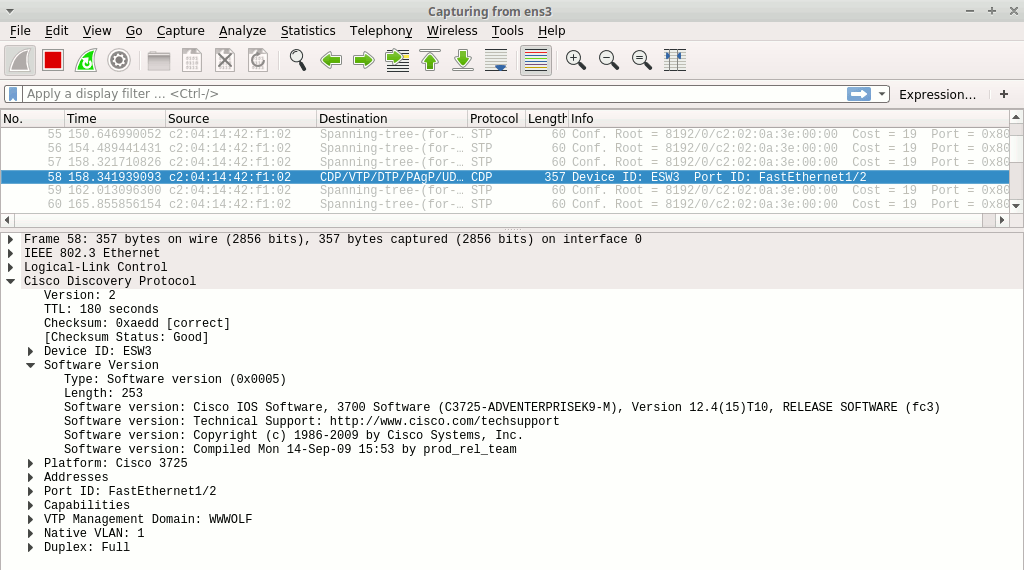 These messages allow a Cisco device to share some technical details with other directly connected devices. This protocol is used by several Cisco proprietary features, such as:

CDP packets are usually not directly exploitable with a notable exception.

Unlike normal network traffic which is not parsed but immediately forwarded through ASICs (see here for more information), CDP messages content needs to be parsed by the device’s general purpose CPU. Would a a bug be present in the parsing software an attacker may be able to send specially crafted packets and execute arbitrary code on a near-by device.

This particular attack is out-of-scope of this series. We will just notice that CDP messages are extremely verbose when it comes to devices details, providing:

How an attacker can take advantage of STP, and how to prevent this.