GNS3 historical use-case was to act as a GUI around Dynamips to emulate Cisco devices. However, while stable, this emulation may not be as straightforward as it could be and has some limitations.

To understand the negatives, we first need to understand how IOS-based Cisco hardware work.

Professional switch and router devices cannot be reduced to a general purpose small-factor computer with a few additional network interfaces.

When using a general purpose computer with classical network adapters to build a router/firewall appliance, all the processing occurs at the software level, generally the operating system kernel.

On specialized hardware such as Cisco switches and routers, the operating system (here IOS) works tightly with some underlying specific (and usually proprietary) hardware and delegates parts or all of the processing to dedicated chips, the Application Specific Integrated Circuits or ASICs, to allow faster processing. 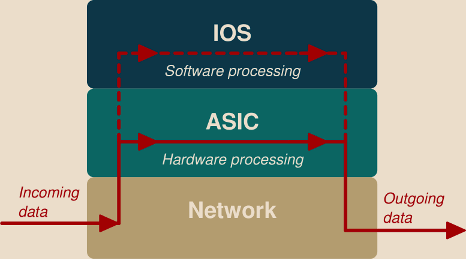 On the other side, most of Cisco routers logic occurs at the software level as part of the IOS firmware. Emulating a Cisco router hardware to run its IOS images is therefore easier than emulating Cisco switches.

Dynamips, the Cisco devices emulator used by GNS3, only emulates router devices. However, we will see some workarounds allowing to still have some Cisco switching features in your GNS3 topologies.

There are several possibilities to add Cisco devices in your GNS3 topologies, some go through virtualization and other through emulation. These two notions must not be confused in order to better understand the advantages and limitations of each solution:

While Dynamips allows to emulate a wide range of routers, two are of special interest and are the most widely used: the c3725/c3745 and c7200 devices.

Any valid image for these devices is sufficient in most situation. If, however, you require some specific features or would-like more information on the features proposed by a given firmware image, you can freely check the on-line Cisco Feature Navigator.

These routers accept Cisco EtherSwitch modules, allowing to add some switching ability to the router, and the good news is that Dynamips offer a basic but stable emulation of these modules.

These devices are end-of-life now, they only run IOS 12.x, but they are very versatile as they can act not only as a router but also as a layer-2 or layer-3 switch in your GNS-3 topology.

There is still a few difference between an EtherSwitch router module and an actual Catalyst switch (note that these differences come from how the EtherSwitch module itself works, not from Dynamips):

As we will see below, some of these limitation can be solved by using IOU.

These devices are more recent and allow to run IOS 15.x images.

They have no switching capability, but they remain useful when you want to test some feature specific to IOS 15.x (for instance entry-level Cisco certifications require students to be familiar with the new licenses management features which came with IOS 15.0).

Alternatively, you can do as Keith Barker and do some “snooping around” ;) .

Installing an IOS firmware in GNS3 requires several steps. Most of them are shown during the first four minutes in this video by Anthony Sequeira (note that this video shows an older version of GNS3).

IOU stands for IOS on Unix. This is a Cisco device emulator, allegedly initially designed to run on SunOS systems and later ported to other platforms such as Linux.

This was initially a internal project within Cisco, not designed to be distributed of even discussed outside of the circle of Cisco employees. If you are not a Cisco employee, you may not be authorized to use this software.

Nevertheless, an experimental version of this software leaked outside of Cisco offices. While being experimental and having its own serious issues, it is still an interesting alternative solving some of Dynamips-based IOS virtualization issues.

Unlike IOS firmwares which run in a virtualized environment controlled by the Dynamips process, IOU are native executable files which execute directly on your environment.

In other words: they are executable programs.

Would you be tempted in searching and downloading IOU from some untrusted shady sources, keep in mind that they may potentially embed some malware targeting your host and/or your network.

Several IOU binaries are available, emulating various options but more importantly emulating devices acting at the layer 2 (switching) or the layer 3 (routing). Layer 3 is well covered by Dynamips, however IOU is a really interesting alternative to test some layer 2 functionalities not available when using Dynamips.

If you want to learn more about IOU, the reference on the subject is Evil Router’s FAQ. More background information is available on Free CCNA labs, another blog maintained by the same author.

I am using Debian on a 64 bit architecture, depending on your system and host architecture the exact steps you need to follow may vary.

My personal guess is that IOU is an early development snapshot of what later became the vIOS once freely downloadable from Cisco website as part of their SDK Cisco’s One Platform Kit (onePK), later replaced by the paid VIRL virtualization platform not freely downloadable anymore.

vIOS usually presents itself as a virtual machine image hosting IOS. It is very similar in its form and behavior with IOU, there are images available for the layer 2 and 3 but layer 2 are the most useful ones (IMHO).

Compared to IOU, the fact that it does not run natively on the host raises some limitations:

The advantage compared to IOU:

I know, this is very short, that’s why I usually prefer to use IOU over vIOS.

Maybe there is a way to extract the emulated IOS from the virtual machine image. Due to the low benefits I did not do any research in this area, but this would allow to get the best of the two worlds.