Virtual machines can be added in GNS3 topologies as end devices nodes and can play various roles:

While virtual machines offer a reasonable level of isolation between the guest and the host systems, VPCS do not even attempt to provide such isolation as executing a command on the host from a VPCS guest is as simple as prefixing it with a !:

If you want a GNS3 topology to be isolated from the host system and the physical network, don’t use VPCS nodes but use lightweight virtual machines instead.

Appliance and software templates are just plain text files, not archive files and they do not contain any virtual machine. They only store the GN3 node settings and either:

When installing a Qemu-based template, you may need to review its settings. In particular

While the GNS3 images maintained directly by the GNS3 project team are high-quality, the quality of the content provided by third-party is very variable.

Third-party appliance and software templates often require outdated and hard-to-find firmware or installation images. While sometimes you can force the template to accept a file by removing or modifying the hash stored in the template file, often it is just easier and safer to simply manually create your own nodes.

To import a virtual machine, from GNS3 menu bar go in Edit > Preferences. The left pane of the Preferences window should propose you, among other topics, the Qemu VMs, VirtualBox VMs and VMware VMs allowing you to create new GNS3 end device nodes by importing the selected virtual machine. 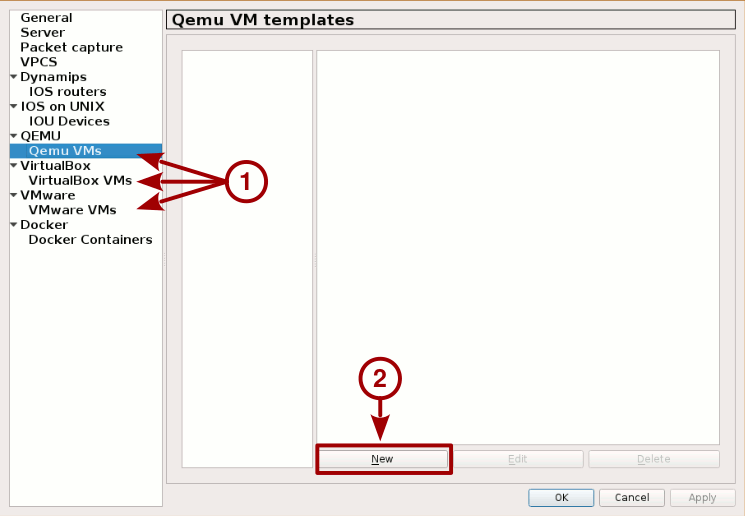 All things being equal, I personally prefer to use Qemu virtual machines as they are more flexible and reliable thanks to better support of linked based VMs (see below), offer more configuration options and the access to the guest console is more user-friendly (no need to keep its window permanently open).

GNS3 currently suffers from some bugs (#2239, #2314) which may crash the GNS3 server when adding a large virtual disk image to it.

The workaround is to manually create a snapshot file like this

And then provide the snapshot file to GNS3 instead of the large, original HDD image file.

Linked base VMs is a feature natively supported by Qemu, but its support by GNS3 for VMware and VirtualBox is still experimental.

Several of these limitations come from the fact that several nodes cannot access simultaneously the same virtual machine HDD image.

The common but quite inefficient workaround for this situation is to manually create several copies of the same virtual machine, one for each node and for each topology, and import every copies as individual end devices nodes in GNS3.

But a cleaner solution is by using linked base VMs..

When this feature is used, GNS3 won’t directly access the created virtual machines anymore, instead it will generate a snapshot and store it inside the GNS3 project directory. Such snapshot acts as an intermediary layer over the VM virtual HDD: unmodified data is read from the original virtual machine HDD image file, but all write operations occur only on the snapshot file.

If you add several end devices nodes referring to the same linked base VM, whether in the same topology or in different ones, each one has its own snapshot file, meaning that each one is independent from the others.

When using linked base VMs, any modification of the base virtual machine, the one initially created and serving as a base for all snapshots, would irremediably invalidate all snapshots files and corrupt all associated end device nodes in your topologies.

To avoid any wrong manipulation of the base virtual machine, GNS3 automatically proposes to copy it in its own directory tree. Depending on the virtual machine size, the operation may take several minutes but is recommended.

You are then free to use the original standalone virtual machine as you like. For instance you may want to use it as a master copy, to regularly generate new updated versions of this virtual machine as new GNS3 end devices nodes.

Create your own virtual machines

Install the OS outside of GNS3

Usually, you can just begin by creating a standalone virtual machine the usual way, then import it into GNS3 as described above.

However, if you are using Qemu and depending on your settings this can induce a change in your virtual hardware properties that your guest system may not like (either because of technical reasons like Windows’ Fast Startup feature or due to license issues as this may be identified as a new computer).

In case of issues, ensure that similar Qemu options are used both inside and outside GNS3. Right-clicking on a running Qemu VM node and using the Command line option shows you the complete Qemu command used by GNS3 to start this guest. New options can be added in the VM node settings, under the Advanced settings tab.

Check in particular the -cpu option: ensuring that you keep the same CPU type both inside and outside GNS3 solves a lot of issues (GNS3 does not use this option by default).

Install the OS from within GNS3

For particularly tricky cases or if you prefer doing it this way, you can install the guest operating system directly from within GNS3: