The main practical difference between a legacy hub and a switch is that the switch will do its best to forward ethernet frames only on the port allowing to reach the recipient, it won’t blindly forward everything everywhere as as a dumb hub would do.

To achieve this, upon reception of a frame the switch stores the senders MAC address associated to its input port in an internal memory, usually implemented as a CAM table. Thanks to this information, would a packet have the same address as recipient, the switch will now forward this packet only to this port and not the other ones.

I already wrote a more focused article on MAC table overflow within the context of GNS3 simulated environments, which resulted in patch being submitted upstream and initiated the development of the macof.py tool. The original article is available here.

In this article I detailed a classical switch implementation as follow:

MAC address table are made large enough to prevent this situation to happen under normal circumstances (usually 1000 or 2000 entries for desktop switches and 5000 to 16000 entries for common enterprise ones). However, a malicious user may send a large number of packets, each bearing different source MAC address, which will artificially fill up switches MAC address tables, thus forcing them into this fall-back behavior.

This is this attack and the way to prevent it that we will see in detail. 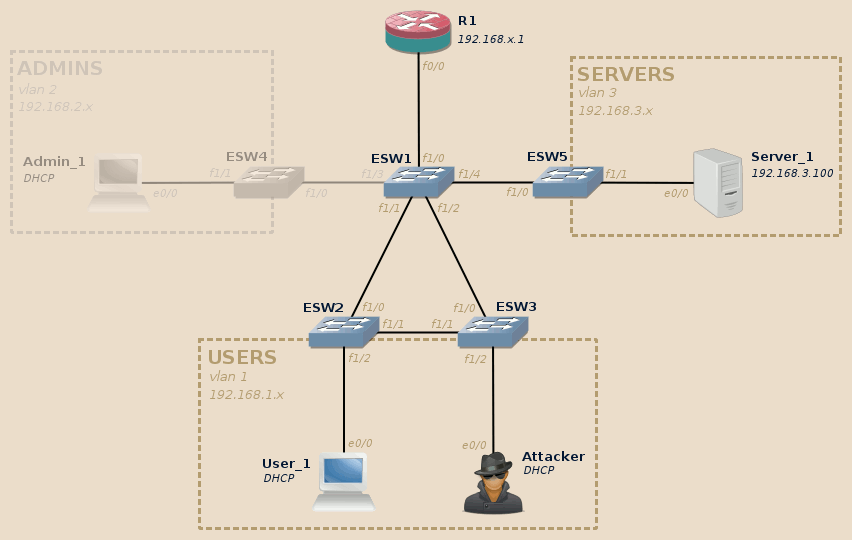 This articles relies on the same topology as the rest of the series. If you didn’t read the introduction post, do it now.

For this lab we will use the Users and Servers VLAN. The Admins VLAN will not be involved.

As per the tools, we will use macof.py, Wireshark and a browser with a plugin allowing to edit the cookies (here I will use Firefox with the Cookies Manager+ plugin).

An Internet access allowing to download missing tools can be built for your Attacker node in GNS3 by adding a Cloud node to your topology and temporarily connecting the Attacker to it.

Initially, MAC address tables only contains the minimum information allowing the switches to forward their packets correctly. Given the size of our lab network, this is not much information:

Here ESW2 only has one entry: the R1 router. Also note that the table may contain up to a maximum of 8192 MAC addresses.

If the counter is zero, ensure there is a minimum activity on the network for instance by pinging Server_1 from the Attacker machine.

The traditional tool for MAC table overflow attack is macof from the dsniff project. However this tool is old, seemingly unmaintained (last update in 2000) and I find it quite inefficient for the task.

I therefore decided to build my own alternative, macof.py, available here.

Usually you should be able to run ./macof.py without any parameters to use the default settings. However, this attack is quite intense, specially on home virtual labs, so to create the best conditions you may need to adapt default settings a little:

Here is the command I will use:

Wait a few seconds, switches CAM tables should now be filled up:

In practice the MAC table size is capped to 8189 instead of 8192. This is an implementation issue of Dynamips’ NM-16ESW module with no consequence.

As the attacker, you could also take advantage of the Spanning-Tree protocol to redesign the topology to make the flooding and data interception even more efficient. More information can be found in the previous post of this series.

It is now time to fire-up Wireshark.

Before starting the capture, you may want to specify a capture filter: 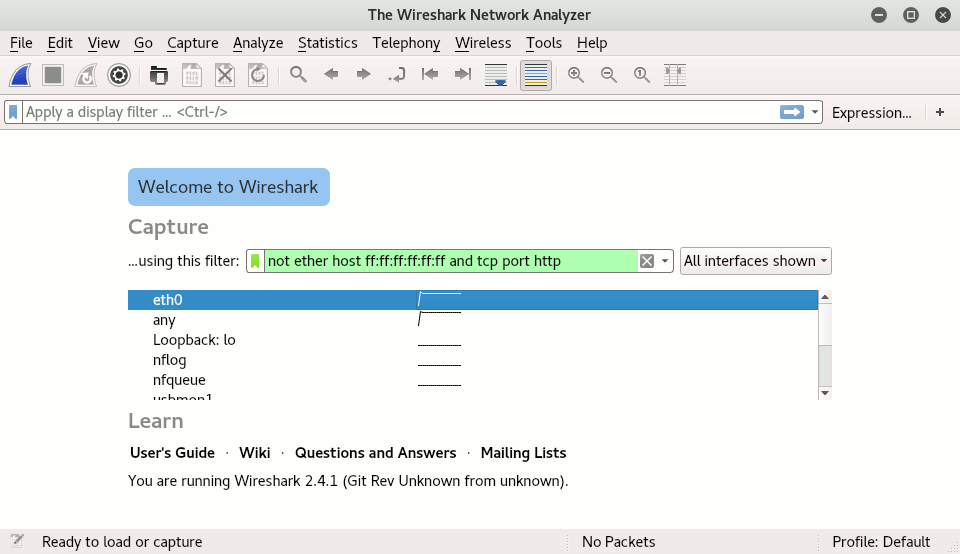 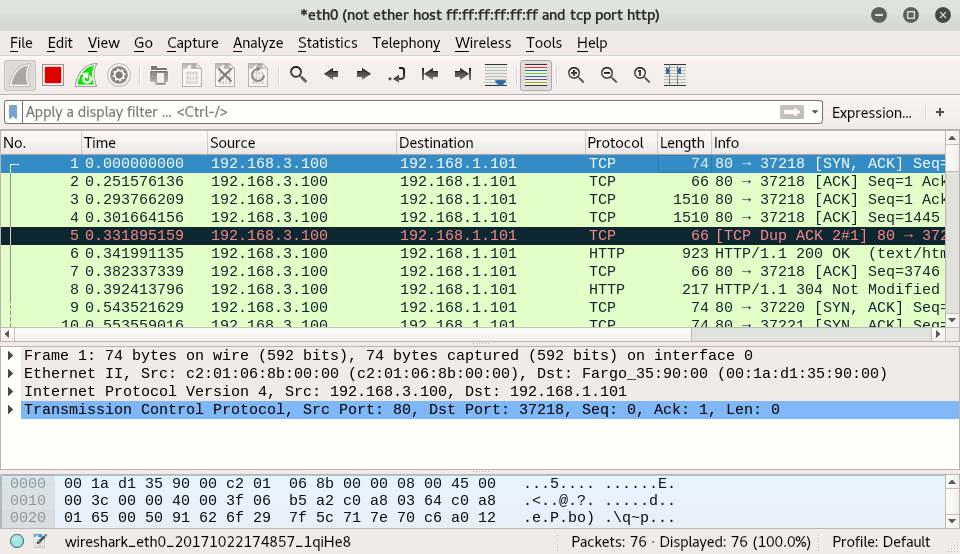 If you don’t capture anything and the User_1 host was already running, close its Firefox for more than 30 seconds then try again: Firefox may have a background network activity (checking updates and sending usage statistics) registering User_1 MAC address in switches MAC address tables.

For the same reason, in real-life this attack will be the most efficient after a long period of inactivity where the computer were either turned-off or in stand-by mode, typically the beginning of the work day and, to a lesser extend, after the lunch pause.

This is normal and expected, albeit largely ignored by those limiting themselves to theoretical approaches of security and thinking that MAC table overflows somehow magically “turns a switch into a hub” or make it “fail open in repeating mode”, as it is often described.

This depends on the algorithm implemented in the switch, but on sane and modern devices the MAC flooding should not be able to overwrite already existing and legitimate MAC entries (except following an inactivity period longer than the configured maximum aging-timer, as usual).

Under normal circumstances the default router address is always known to the switches as nearly all activity on the network involves it. It is one of the first address learned when the switch is started and is permanently refreshed. The addresses that are added and removed from the switch throughout the day are those of end-nodes, here user’s workstation.

We can therefore see that this attack has two main limitations:

Nevertheless, we will see an example how this attack can be still be used with profit.

Go back on User_1 and access to a management page of the Server_1 web application. On my side, I will access a Wordpress administration page (for those using the same appliance as me, click on the Bitnami logo in the bottom-right corner to get a listing of default credentials and links to available management pages).

On Wireshark, find one of the packets corresponding to the server answer to the user succcessful authentication, then right-click on it > Follow > TCP Stream.

You must locate the server’s answer to the user authentication, at it is at this moment that the server’s reply contains the cookies values. Other messages from the server won’t contain them, and as you don’t have access to the data sent by the client you cannot fetch this information from there too.

In case of doubt, don’t hesitate to do a few attempts by login-off and login-in the user again, noting each time the number of the last packet captured by Wireshark.

In real world, you may have dozens of users opening new sessions after an inactivity time, being able to capture just a few of them might be enough. 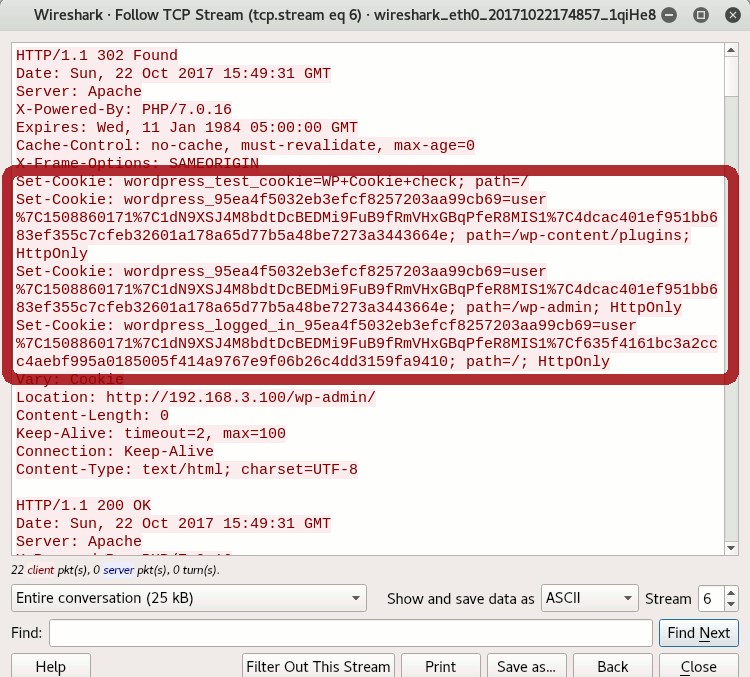 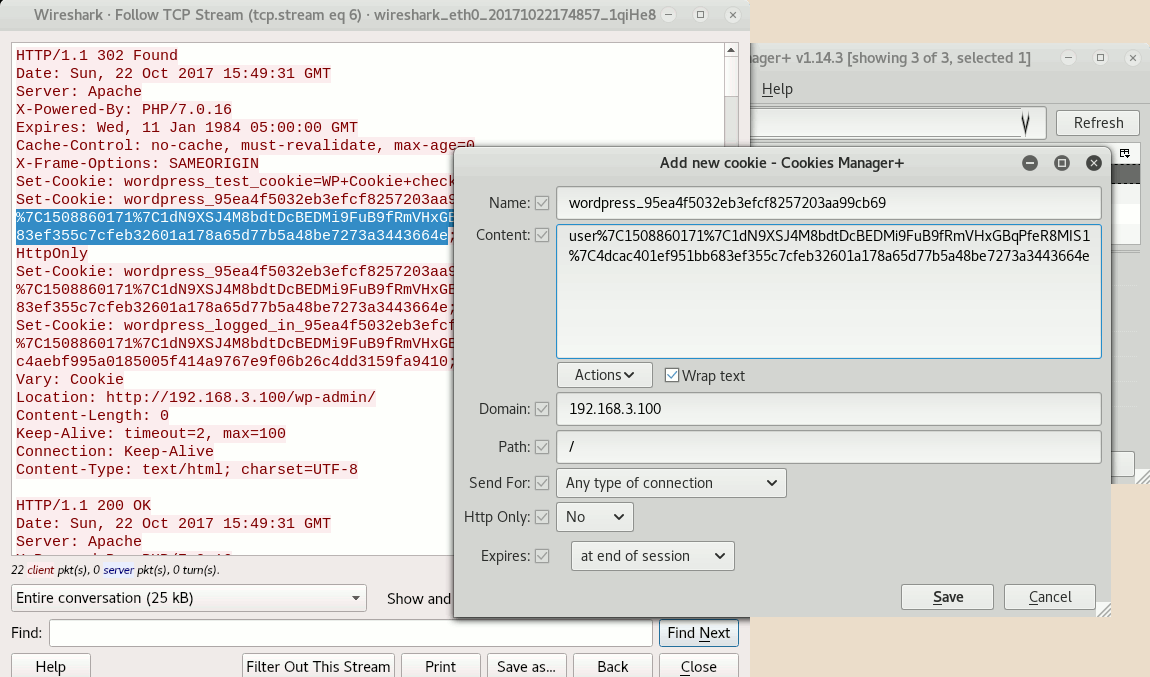 I added to new cookies, prefixed wordpress_… and wordpress_logged_in_…: 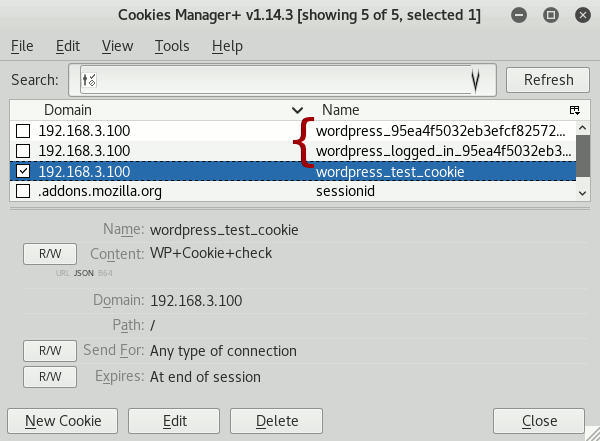 Try again to access the authentication URL: “Welcome!”, you are now granted access to the administration interface! 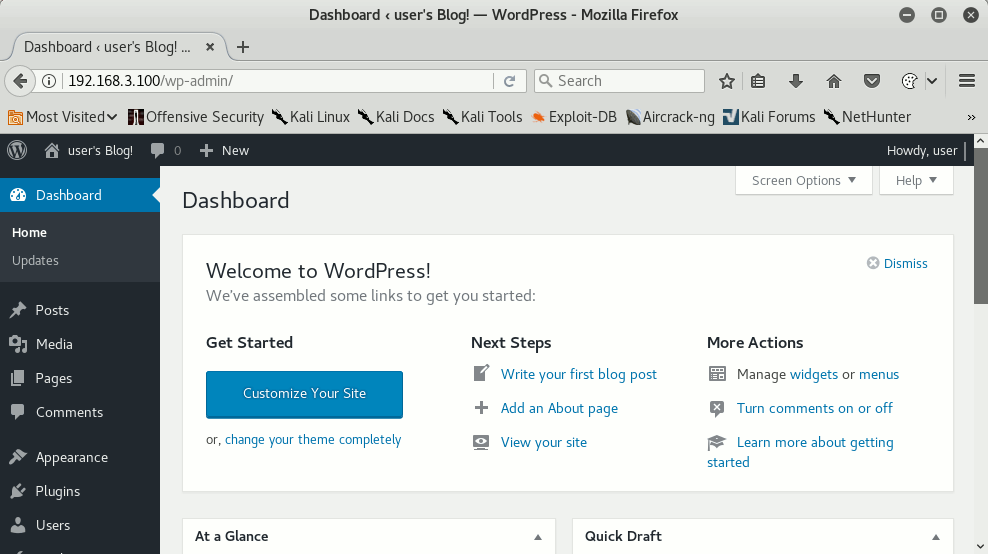 As an attacker, there are several things that you can now do, depending on what you want to achieve:

Of course, none of these suggestions is exclusive and this list it not restrictive. A determined attacker will most likely engage through various ways and channels simultaneously to get the most impact, both technically and psychologically.

The mitigation for this attack is to set a limit on the number of devices expected per port. On Cisco devices, this is achieved by enabling Port Security.

As far as the virtual lab is concerned, while IOU doesn’t allow to really reproduce the attack itself, using MAC table overflow tools still allows to increase the number of entries in its CAM:

Port Security must be enabled on a per-port basis on each access layer switches:

Port-security default value is very low (one single MAC address allowed per port). There are various reasons why more than one address may appear on a port: presence of an IP phone in addition to the workstation, the user may be using virtual machines in bridge mode, the user may use a desktop switch to share a wired connection with a colleague, etc.

Unless your policy explicitly forbids such situations, you will most likely want to increase this value. As long as preventing MAC table flooding is concerned, there is no issue in setting this value to a few dozen: this will still prevent attackers from simulating thousands of devices while avoiding false positives and prevent legitimate users from doing their work.

Now attempting to run the attack makes the port to be automatically shutdown, isolating the offender:

The port can be restored manually, the same way as with BPDU Guard:

And a timer can also be set to enable port auto-recovery:

Now the switch should be able to shutdown the port during the attack, and restore it afterwards:

Here we kept the default action, err-disable, which is the most brutal. When a Port Security violation occurs, alternative actions can be selected:

To select the protect mode instead of the default err-disable:

The sticky addresses setting is independent of the violation action setting:

A step-by-step guide to practical DHCP exploitation and protection.