Some tools, like PGP, are still stuck1 to legacy cryptography, mainly the RSA algorithm. For such tools, RSA-2048 is often described as strong enough for any foreseeable future, anything above being overkill The GnuPG official documentation in particular even goes this far as considering that using RSA-3027 or RSA-4096 constitutes “an improvement so marginal that it’s really not worth mentioning”, adding that “the way to go would be to switch to elliptical curve cryptography”.

The assertion that this improvement is “marginal” is debatable, as is the trust in the elliptical curves to protect us in the future.

While the NIST considers RSA-2048 to be safe for commercial use up to 2030, it still advises the use of at least a RSA-3072 key for beyond (see BlueKrypt’s Keylength website to get an overview of various recommendations).

Read quickly, such recommendation sounds like RSA-2048 should indeed be safe for todays world. In fact this depends on the use you intend for your keys, as “safe up to 2030” doesn’t mean that you are safe as long as you plan to migrate to something else before 2030. This is not some kind of end-of-support date. This means that you must assume that whatever you encrypt now will be decrypted in a dozen of years (and a dozen of years goes pretty fast).

For short term secrets or, to some extents, signature this is usually less of a problem. The fact for instance that an attacker may be able to fake a signature from a dozen years ago shouldn’t cause an issue: by that time such signature should have been revoked and good software should refuse to trust keys size or algorithms widely known as weak.

But for systems which may imply long-term storage or the exchange of valuable information, then the fact that the data may be decrypted in a dozen of years may potentially be devastating. Concretely, if you store today an encrypted archive protected using RSA-2048 on a cloud service, you must assume that the content of this archive will be known to authorities and intelligence services in a dozen of years (and, again, time goes very fast).

Even if the archive file is to be quickly deleted, some intelligence agencies attempt to process digital data exchange as a whole (the whole of Internet, satellites, phone communications, etc.) and massively intercept and copy even remotely potentially interesting data (an encrypted archive for instance is a perfect candidate) to be able to analyze or decrypt them few years down the road.

Data acquisition and long-term storage is a major investment for some intelligence agencies, the most widely known example being of course the NSA. A year before Snowden events, Laura Poitras published a short documentary on William Binney, another former NSA employee. This documentary focused on NSA‘s “Stellar Wind” program and their Utah data center:

Binney calculates the facility has the capacity to store 100 years’ worth of the world’s electronic communications.2

The NSA is a dual headed organization, with both a national intelligence and an advisor role to protect against foreign intelligence3. 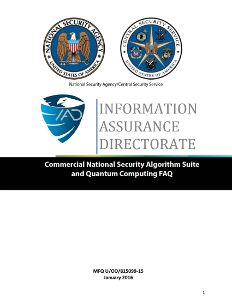 As part of its advisor role, in January 2016 the NSA wrote a very interesting FAQ titled Commercial National Security Algorithm Suite and Quantum Computing FAQ (I highly encourage you to read it). As soon as National Security Systems (NSS) are concerned, RSA-2048 should simply be not used anymore. This is as simple as that. If you want to protect your data, use RSA-3072 minimum, this minimum being kept relatively low for compatibility purposes but knowing that higher is better.

This paper then focuses on the next real threat against modern cryptography. According to the NSA, is not the natural evolution of processing power as it was before, but the progress toward effective quantum computing.

It takes no more time to break RSA on a quantum computer (up to a multiplicative constant) than to use it legitimately on a classical computer.

Leading the NSA to conclude, in the above mentioned paper:

A sufficiently large quantum computer, if built, would be capable of undermining all widely-deployed public key algorithms used for key establishment and digital signatures.

According to the NSA, the future in asymmetric encryption is through these quantum resistant asymmetric algorithms, and not through ECC, despite the claim in the GnuPG documentation quoted in the beginning of this article.

ECC algorithms were an answer to the increase in computational power, but as the threat shifts the answer has to shift too.

One the advantages of ECC algorithms is a return to relatively small key size (a 256 ECC key providing the same strength as a 3072 bits RSA key).

According to this NSA paper, this won’t be the case anymore with quantum resistant algorithms as:

The key sizes for these algorithms will be much larger than those used in current algorithms.

Because of this, the NSA also calls interested parties to measure potential side-effects before-hand:

Cryptography is a very complex and sensitive matter, it should go without saying none of these practices should be considered in the realm of any real security scheme.