Containers and jails allow you to make your system more secure, more reliable, more flexible and, at the end of the day, easier to manage. Once you get used to it, it become difficult to conceive to setup a server without such features.

But what are they exactly?

Containers and jails designate different implementations of operating-system-level virtualization. Like a lot of low-level security features we encounter in today’s world, this functionality can be traced back to the old mainframes, where reliability and parallelism are at the core of the system, and which allow to partition a host system into smaller isolated systems.

This feature then went through commercial Unixes to finally reach open-source operating systems. The first open-source OS to really implement this feature was FreeBSD which offers its jail functionality since 2000 (FreeBSD 4.0). In the mean time there were several more-or-less successful attempts to implement an equivalent functionality in Linux, but Linux users had to wait until 2008 (2014 for the first stable version) for a standardized and upstream supported solution to be available as Linux Containers (LXC).

Linux containers and FreeBSD jails (I will use the term jail to designate both implementations in the rest of this article) are very flexible and allows you to isolate anything from a full-fledged, multi-user environment up to a single process.

But, as long as general server hardening is concerned, where they really shine (IMO) is in their ability to partition a server on a functional basis.

Let’s take the example below. It looks like a classical web server platform with the notable difference that each components, while isolated from each other, are all consolidated inside the same single host. 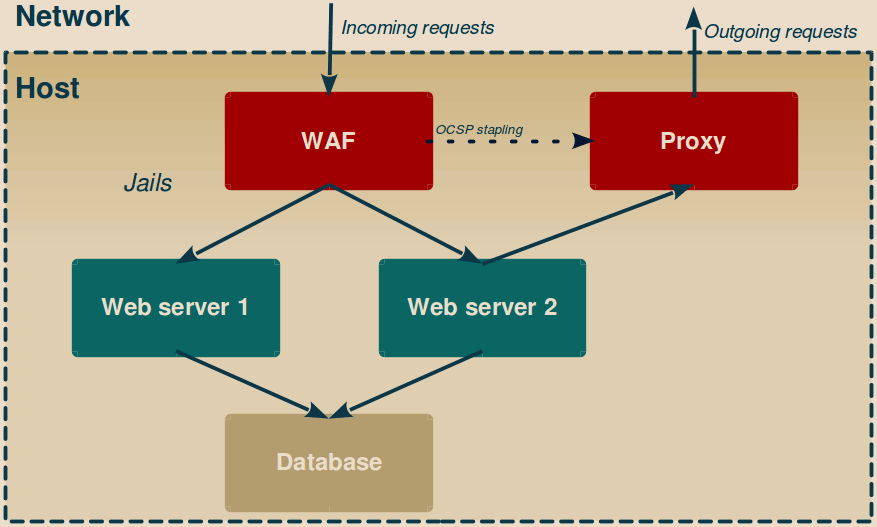 All incoming and outgoing request are handled by the WAF and the Proxy jails. The idea here is that anything which enters or leaves the host must go through centralized checkpoints, both to enforce a policy and detect suspicious activity.

Actual services run deeper in the server. They have no direct access to the external network, and cannot be directly reached from the outside world either.

This picture is very simplified as normally you will have several other jails gravitating around these main one (I strongly recommend at least one syslog jail to store the log out of jails reach, while technically doable from within the Proxy jail functional separation should encourage you to dedicate another jail for DNS resolution, etc.).

Keep in mind two advantages of jails compared to other virtualization solutions:

The WAF (Web Application Firewall) here usually also does SSL-termination (as you always use HTTPS whenever possible, don’t you?), allowing to store cryptographic material out-of-reach of the web server would it be compromised.

Depending on your exact setup, the WAF may also need an access to the Internet to do OCSP stapling. In this case, don’t grant it a direct Internet access but instead force it to go through the Proxy jail. Always keep things under tight control.

It may be tempting to use the WAF to cache answers. Even micro-caching (caching an answer for a few seconds) would allow to greatly reduce web server load without any noticeable difference in content update reactivity.

However, it is very easy to screw things up at this step and it regularly happens that private or sensitive information (like valid session identifiers) gets cached and then leak, notably in search engines results, making them available to attackers.

This example shows two web servers, one (Web server 2) needs access to some external resources while the other (Web server 1) don’t.

Web servers have no direct access to the network and are not directly reachable from the network. This means that if an attacker manages to executes a payload on the web server (be it through PHP code injection or whatever):

The Proxy enforces a whitelist-based policy. Unlike proxies commonly found on networks, this one should not block a few blacklisted addresses and operations, but instead ensure on a jail-per-jail basis that each jail only attempts to access the resources it is expected to access (and optionally that the answer also match expected criterion).

Here you have to think about how to handle SSL connections:

Personally I decide this on a case-per-case basis with the following rule of thumb:

I’m talking about SSL termination, not SSL interception as there is no point in encrypting the communication between the proxy and the inner jail. While the Squid proxy support SSL termination, not all client tools support delegating SSL to the proxy (personally I use a customized curl for this purpose, I will release the patch as-soon-as I have a clean version of it).

FreeBSD users, note that I’ve found a serious flaw affecting FreeBSD from version 7.0 to 10.3 included (while supported until April 2018, there is no fix planned for this version), as an attacker has a direct access to SHM objects (as used by the popular Squid proxy) from any jail.

In the current example, an attacker would be able to DOS a Squid proxy (and potentially execute arbitrary code in the Proxy jail) from any jail (even from Web server 1 which should normally not be able to interact at all with the Proxy jail).

More details are available in my dedicated article.

At last the databases are stored in jails located even deeper in the host.

As it is not possible, even for the root user, to change or spoof a jail IP, checking the source IP on the database server side is very effective to ensure that each jail only accesses the databases they are supposed to access.

Nevertheless, if an attacker manages to execute arbitrary code in the database jail he will still be in measure to access other websites databases. As long as you keep your system updated, the probability of such an attack is quite low (don’t forget that such attacker must already have taken control of a web server as a prerequisite), nevertheless nothing prevents you from using several database jails to mitigate or get rid of this risk.

The example shown here shows a classical web server situation, but this can be expanded to any kind of service and the recipe is always the same:

Divide the service in functional blocks

If done correctly, this is what will make your server really easier to administrate as jails will turn into independents, and potentially reusable modules.

If we take the example above:

Containers modularity properties opened the way to new software solutions allowing to easily develop, share and install software stacks. A classical example of this is the Docker system.

Bear in mind however that the target of these solutions is easiness, not security.

Use them to accelerate the deployment of new applications if you like, but don’t use them as a “secure containment system”.

Thanks to the isolation between the host and guest systems, it becomes very easy to design and test the jail in a QA environment, try various solutions and settings, etc.

Here are a few notes about setting up the jail:

Maybe later I will write more step-by-step guide about FreeBSD jails and Linux Containers, but for now that’s all folks!